Tea for Two
A Team Approach to Character Development

Some writers begin the process of creating characters with forms and formulas that help them organize their ideas. For us, as co-authors, the first phase of character development resembles a preschool spatter painting class. A typical phone call might sound like this:
“Okay, we’ve got Steven’s friend Marita.”
“I don’t like that name. She needs something softer, more domestic.”
“Throw out some other ones.”
“How ‘bout a “D” name?”
“Can’t do that. We’ve got Dena and Doreen in book one.”
“Name some people our age.”
“Cynthia, Mary, Karen....”
“Hang on, Brian’s calling my cell.” (Time lapse. Cathy talks to hubby. Becky fills dishwasher.) “I’m back. How about Gretchen?”
“Gretchen’s the part-time help at the bakery.”
“Change her. Let’s give her a one syllable name.”
“Okay, she’s Sue. So Gretchen has been bugging Steven. . .”

At this point, Gretchen is little more than a skeleton with a name. Once we’ve assembled a crew of skeletons, the fun of fleshing them out begins. This phase looks a little more sophisticated than the first. Imagine Picasso and his clone in their “Synthetic Cubism” era—we’re tossing body parts, quirks, and inner conflicts and don’t really care where they land on the canvas. At this point, plotting the story line and developing our characters all jumble together.

Though we live only thirty minutes from each other, our schedules rarely mesh, so most of our story development is done by phone or e-mail. Last week was a rare exception. We had three days away from distractions to flesh out our characters for Parting Secrets. We’re calling this method “Front Porch Plotting and Rocking Chair Character Development.” The necessary elements are a log cabin, notebooks, pencils, and a bottomless pot of hot tea sweetened with honey. The cabin built by Cathy and her husband is a perfect writers’ retreat. It’s amazing how the rustle of wind in the tops of stately pines enhances creativity. And in a setting like this, it was so much easier to start our sessions with a time of praising the Creator of the nature that surrounded us and asking Him to guide our thoughts and words—something we often forget when working while loading dishwashers and folding clothes. As we sipped our tea, questions buzzed like the Wisconsin mosquitoes that thankfully weren’t out yet.

If we typed one sentence on top of the next the way we talk, it wouldn’t be legible, but it looks something like this:

“There has to be a really good reason Jeannie didn’t tell Steven she was pregnant.”
“He’d lose his job. And get arrested. She was a minor.”
“Hold that thought. I need more tea.” (Becky leaves mid-thought, Cathy scans the woods with binoculars, scribbles a few words, talks baby talk to her Malte-Poo. Becky returns with mug, licking honey off fingers.) “But he loved her. It wasn’t fair to him. She knew he’d rather have her than his career. And he’d willingly have gone to jail if it meant keeping her.”
“So there has to be more to it. Maybe once she got to California she started to like her independence.”
“That works. And twenty-nine years later she’s still independent. But why would she have kept it a secret from her mother?”
“Because she’s—hey, look! There’s my pheasant friend.” (Time out to admire strutting pheasant just yards from porch.) “She’s ashamed of something. What did she do to support herself after she had to leave her aunt’s house?”
“Drugs, prostitution?”
“She was pregnant...” (Cathy looks at empty chair.) “Jeannie, where did you work? Ah! What if she transported runaway girls to Nevada to—”
“Human trafficking! I like it! And then later she’s atoning for it so it makes perfect sense that she’d. . . .”

Five pots of tea and many bathroom breaks later, we’ve got several Cubist paintings and it’s time to bring some order to the chaos. With our first three books (back in the dark ages of the nineties), we filled out pink and blue 3x5 cards for our main characters. Now we’re using questions borrowed from a 2007 blog interview with Robin Miller. (Unfortunately, neither of us remembers whose blog we found this on, but thank you, Robin.) The questions are separated into categories: 1.) Physical description, 2.) Personal traits & characteristics, 3.) Background, 4.) Personal possessions, 5.) Plot complications, 6.) Relationships, and a final category that includes habits, quirks, motivations and goals.

At times—just the way Cathy spoke to the empty chair—we interview our characters out loud, asking them about past relationships and favorite foods, etc. It’s amazingly effective, but not something to be done at Starbuck’s.

All these questions allow us to develop a lifelike picture. One of the things that pushed us into writing in the first place was reading books with cardboard characters and stilted dialogue, so we’re somewhat obsessive about creating characters that are realistic. We’re constantly saying things like, “That sounds too stiff and formal.” Or “We need to make her stronger.” We ask each other questions like, “Would you really say that to your son?” or “Would your husband ever do that?”

Of course, our characters often develop minds of their own and sometimes rewrite their answers as we go along. Our daily experiences, something in the news, or a jogged memory influence their capriciousness.

When it comes to developing unique yet believable characters, team writers have the built-in advantage of two perspectives and two lifetimes to draw from. We’ve been friends for thirty-two years, and this spring we’re both celebrating thirty years of walking with the Lord. All that shared history helps us finish each other’s thoughts, but it’s the diversity of our backgrounds and personalities that really lends texture to our characters. We’d recommend our “Front Porch” brainstorming method even to solo writers. Find a getaway spot with few distractions, grab a critique partner or an unsuspecting spouse, ply them with sweet tea, and watch your characters develop from spatter paint to realistic masterpieces.
Editor Du Jour JoAnne

I love the name of your plot method. :) For me, I have to write my characters before I get to know them. Once I do, I go back and flesh them out better.

Thanks for the fun blog!

Brainstorming is so fun, I can imagine brainstorming a whole book but the actual writing together, that is hard for me to quite imagine.

You have my undying respect

We'll treasure that respect, Mary! It took a lot of trial and error (and tea) to find the best way for us to write together. Now I do the actual writing, send it to Cathy, and she tweaks. We tried alternating chapters, but it's hard to make it sound like one voice. I admire writers who can make that work.

That sounds like such a fun thing to do. You really make the process of co-writing sound very appealing :)

Come on in to The Edit Cafe! Pour your favorite beverage and sit down with me for a while. I hope you'll find insight and inspiration here, from my side of the page to yours. 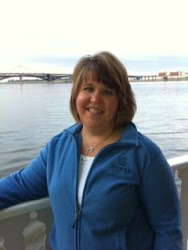 Our Authors' Blogs and Links

The posts on this blog are provided "as is" with no warranties and confer no rights. The opinions expressed on this site are our own and do not necessarily represent those of our employer.